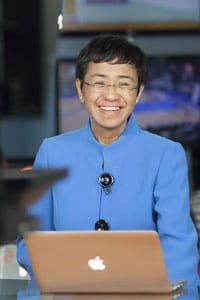 Maria A. Ressa is the CEO and Executive Editor of Rappler, a social news network which uses a hearts and minds approach to news through a unique mood navigator. Rappler combines the best of professional journalism with citizen journalism and crowdsourcing.

Ms. Ressa has been a journalist in Asia for more than 30 years, most of them as CNN’s bureau chief in Manila (1987-1995) then Jakarta (1995-2005). She was CNN’s lead investigative reporter focusing on terrorism in Southeast Asia and wrote “Seeds of Terror: An Eyewitness Account of al-Qaeda’s Newest Center of Operations in Southeast Asia” (Free Press, 2003).

In 2005, she took the helm of ABS-CBN News and Current affairs, for six years determining strategic direction and managing more than 1,000 journalists for the largest multi-platform news operation in the Philippines. Her work aimed to redefine journalism by combining traditional broadcast, new media and mobile phone technology for social change.

She taught courses in Politics and the Press in Southeast Asia for her alma mater, Princeton University and in broadcast journalism for the University of the Philippines. She worked on her second book, “From Bin Laden to Facebook” as Author-in-Residence and Senior Fellow at the International Centre for Political Violence & Terrorism Research in Singapore. She is also the Southeast Asia Visiting Scholar at CORE Lab at the Naval Postgraduate School in Monterey, California.